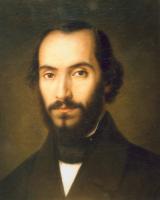 As a boy, Balcescu studied at the Saint Sava College (from 1832), and was a passionate student of history. At the age of 19, he joined the Wallachian Army, and, in 1840, took part, alongside Eftimie Murgu and Cezar Bolliac, in Mitica Filipescu's conspiracy against Prince Alexandru II Ghica. The plot was uncovered, and Balcescu was imprisoned in Margineni Monastery, where he remained for the following two years. The rough imprisonment conditions left irreversible marks on Balcescu's health.

Upon his release (after being granted a pardon by the new prince Gheorghe Bibescu), he took part in forming a secret society drawn up from the Freemasonry and named Fratia ("The Brotherhood"), which he led together with Ion Ghica and Christian Tell (joined soon after by Gheorghe Magheru) in resistance against the new Bibescu.

In order to further his history studies, Balcescu went to France and Italy, and was, together with August Treboniu Laurian, the editor of a magazine entitled Magazin istoric pentru Dacia, which was first published in 1844; that year also marked the publishing (in a different magazine) of his historical essay Puterea armata si arta militara de la intemeierea Printipatului Valahiei si pana acum ("The Military Strength and Art of Warfare from the Creation of the Wallachian Principality to This Day", which argued for a strong military as a guarantee of self-determination).

Magazin istoric went on to publish the very first collection of internal sources on the history of Wallachia and Moldavia - medieval chronicles which were afterwards published as a single volume. One of his contributions to the magazine singles him out as a radical liberal: Despre starea sociala a muncitorilor plugari in Principatele Romane in deosebite timpuri ("On the Social Status of the Ploughmen of the Romanian Principalities at Various Times") argues for a land reform, aimed at dispossessing the boyars of large plots of land (that would in turn be awarded to landless peasants); it was used as reference by Karl Marx in his succinct analysis of the events, a fact which was to earn Balcescu credentials in Communist Romania.

In 1848, after taking part in the uprising in France, Balcescu returned to Bucharest in order to take part in the June 11 revolution. He was, for just two days, both Minister and Secretary of State of the provisional government put in place by the revolutionaries. His advocacy of universal suffrage and land reform was not shared by many revolutionaries, and his group came into conflict with the traditional figures of authority - the Orthodox Metropolitan Neofit, although head of the revolutionary government, opposed the reforms and ultimately conspired against the Revolution itself.

Balcescu was arrested on September 13 of that year by the authorities of the Ottoman Empire who had put an end to the Revolution; his relationship with the Ottomans was complicated by the fact that the radicals' strict opposition to Imperial Russia had made them reliable for the Porte - the Ottomans later allowed all participants in the events to take refuge in Istanbul, and thus avoid contact with the Russian troops sent over to assist the Ottoman presence. Balcescu initially made his way to Transylvania, but was expelled by Habsburg authorities, who considered him a threat and an agitator of Romanian sentiment in that region.

In Istanbul and Transylvania

In early 1849, Balcescu was in Istanbul when the Hungarian revolutionary armies under Józef Bem mounted a successful offensive against Habsburg forces and their Transylvanian Romanian allies. The Hungarian government of Lajos Kossuth then entered a debilitating war with Avram Iancu's Romanian guerilla force, and the former members of the Wallachian government were approached by the Polish revolutionaries in exile, such as Henryk Dembi?ski, to mediate a peace between the two sides (in the hope that this was to ensure a stronger resistance to Russia, and counting on the Wallachian resentment towards the Saint Petersburg government).

Balcescu left for Debrecen in May, and met with Kossuth to register the latter's offer to Iancu. Marxist-inspired historiography has celebrated this as an agreement; in fact, Balcescu's papers reveal that he viewed the peace offering as unsatisfactory for Romanians, and that Avram Iancu rejected it altogether (while agreeing to a temporary armistice). The final offer from the Budapest leadership to Balcescu and Iancu called for the Romanians to withdraw from Transylvania, as the region was turning into a battleground between Russia and the Hungarians. When this latter conflict drew to a close, the Romanians in Transylvania, although never particularly welcoming of the Russian presence, surrendered their weapons to the reinstated Habsburgs (Iancu's loyalty to the dynasty had been the subject of a parallel dispute between him and the Wallachians).

Balcescu's most important work is Romanii supt Mihai-Voievod Viteazul ("Romanians under the Rule of Michael the Brave"), which he wrote in exile in 1849 - first published by Alexandru Odobescu in 1860. The volume is history of Michael's campaigns, as the first moment when Wallachia, Transylvania, and Moldavia, came under a single, albeit brief rule. They show Balcescu's commitment to both radicalism and nationalism, his view oscillating between praise of Michael's gestures and criticism of his stance as a supporter of serfdom and privilege. 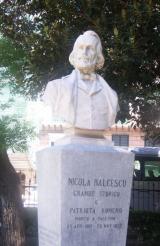 His final years saw an intense publishing activity, including his study, written in French, Question economique des Principautes Danubiennes, as well as a collaboration with Adam Mickiewicz on La Tribune des Peuples. Stricken by tuberculosis, impoverished, and constantly moving between various locations in France and the Italian Peninsula, he died in Palermo (in the Two Sicilies) at 33 years of age. Balcescu never married, though he and his lover Alexandra Florescu had a son, Bonifaciu Florescu (1848-1899), who became a professor of French language and literature.

Also his earthly remains in Palermo, Italy, although the Comunist Party of Romania tried to bring them back to Romania in 1970, to use them for communist propaganda.The Capuchin Monks in Palermo at the Capuchin Monastery, also known as Capuchin catacombs of Palermo, denied to the Romanian Communist Delegation of Historians access to the grave.

Nationalization of his Properties

In the present his properties remain nationalized by the Romanian Government 2011,after 1945,as Balcesti Giltofani Land in Balcesti which in the present is Nicolae Balcescu Museum,taken from Balcescu's family member Radu Mandrea and Aristide Razu,in 1948 by, a "donation act" towards the Communist Government , in Valcea County. 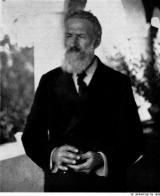 Freemasonry
Romanian Freemasonry
Freemasonry
About Freemasonry
Symbols of Freemasonry
Famous Masons
Famous Freemasons
Alecu Russo
Gheorghe Grigore Cantacuzino
Cezar Bolliac
Dimitrie C. Bratianu
Samuel von Brukenthal
F.A.Q.
Why are you a secret society?
Why do Freemasons take oaths?
Are there any subjects not discussed in a Lodge?
Is Freemasonry an international Order?
Are Freemasons expected to prefer fellow Masons at the expense of others?
Primary menu