Isn't Freemasonry a religion or a rival to religion?

Freemasonry requires a belief in Divinity and its principles are common to many of the world's great religions. Freemasonry does not try to replace religion or substitute for it. Every candidate is exhorted to practice his religion and to regard its Holy Book as the unerring standard of truth. Freemasonry does not instruct its members in what their religious beliefs should be, nor does it offer sacraments.

Freemasonry deals in relations between men; religion deals in a man's relationship with his God.

The prime qualification for admission into Freemasonry has always been a belief in Divinity. How that belief is expressed is entirely up to the individual.

‹ Are there any subjects not discussed in a Lodge? up Why do you call it the VSL (Volume of the Sacred Law) and not the Bible? › 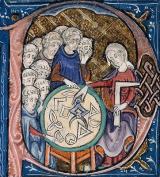 Freemasonry
Romanian Freemasonry
Freemasonry
About Freemasonry
Symbols of Freemasonry
Famous Masons
Famous Freemasons
Mihail Kogalniceanu
Constantin Argetoianu
Alexandru Vaida-Voevod
King Carol II of Romania
Alecu Russo
F.A.Q.
Why do you wear regalia?
What happens at a Lodge meeting?
Are there any subjects not discussed in a Lodge?
Why do you call God the Great Architect?
What does "making good men better" mean?
Primary menu